Derbyshire jac u17 Girls put in a brilliant display winning all of there games to be crowned midlands county champions.

Despite a long journey and early start, Derbyshire came flying out of the blocks comfortably beating Worcestershire 2-0, goals coming from poppy brown and lowri heap.

Nottinghamshire proved to be a much sterner test but some resolute defending from a back four of jess carter, emily cochrane, charlotte steele and lily morris kept notts at bay and a well worked counter by alice hickman and hannah lei was brilliantly converted by chloe knowlson into the roof of the net to give Derbyshire a well deserved 1-0 win.

Derbyshire third game was against Warwickshire and was a comfortable victory for Derbyshire winning 2-0 with goals from Hattie Shenton and Hannah lei, Derbyshire will be disappointed not to have added more goals in a very one sided match.

This led into the final game against Shropshire the only other undefeated side. In a tense tight game, Derbyshire prevailed with a well taken shot from lily morris from a short corner. Special mention to lowri heap, connie magill and ella bradley who worked their socks in this game to keep a well organised Shropshire team at bay.

A great achievement for the team who worked hard, showed great team spirit and didn’t concede a single goal, and a brilliant end to a very successful season. 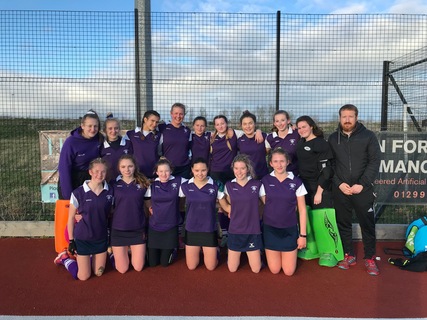 A huge well done to all the girls involved in the final tournament today, Midlands County Champions!!!

5 of the girls also helped the Northants U16 team inbetween their own games and one umpired for another team, great to help and support other teams.

It was a long day after an early start travelling to Stourport HC, the girls kept themselves chilled and calm by chatting, laughing, singing (definitely heard Dancing Queen at one point), bit of hair plaiting and eating! A wonderful day with a wonderful group of young ladies and supportive parents.

Thank you to Roger Carter who stepped in and umpired for us today, he did a fantastic job, very appreciated Roger.

Thank you to Richard for coaching and supporting the girls throughout, well done Richard.

As it has been a great season, to celebrate the girl’s success and friendships, I will be in contact over the coming week to organise an end of season night out - seems Nando’s is a popular choice/request!!!

I took a lovely team photo today, Hatty has managed to message to most of the girls, please let me know if you haven’t received it and I can e mail it across.

Finally, the AC presentation evening is provisionally booked for Thursday 9th May, I will message for this separately to all to ask who will be attending/numbers.

On the 17th March, Derbyshire headed to Nottingham Hockey Centre to contest the Midland U16/17 boys tournament. After a good year with many strong performances, hopes were high of performing well at this end of season finale.

The opening match was against Shropshire, a county who historically Derbyshire have a good record against at this age group. This meeting started well for Derbyshire, with Sam Cooke in particular creating numerous openings down the right flank, only for the final pass or finish to elude us, along with some good defending from Shropshire. Toby Ganley went very close to scoring on a couple of occasions but could not get the opening goal. At half time the boys decided a subtle change in formation was required to open the deadlock, and this indeed proved the case soon after the break with Charlie M connecting superbly with a cross from the right. With Kieran Pell and Oliver Marval now dominating the midfield, a second goal quickly followed after more relentless Derbyshire pressure, to effectively end any Shropshire hopes. The goals came after Charlie Maffam had another shot at goal which was followed in at close range by Josh Taylor Grout. Defensively, Derbyshire were very rarely threatened in this opening encounter.

Our next opponents were Warwickshire who have often proved tough to beat. This contest followed the same pattern, and was very keenly fought. During the first half, Derbyshire had more control of the game, but could not create too many openings with the game developing into a midfield battle. In particular Ben Sellors and Jack Lloyd were combining well to create some strong attacks, and put Warwickshire under considerable pressure. The second half continued in a similar manner, although as the game progressed Warwickshire gradually took more control, playing a high press and putting the Derbyshire back line under considerable pressure with Kieran Whetton distributing the ball well from the back. Will Selby and Luke Griffiths were outstanding in defence with some superb tackling on display repelling many Warwickshire attacks, although inevitably Joe Reed in goal was called into action on a few occasions with some excellent saves, to keep a clean sheet. Overall, a draw was a fair result to conclude this match.

The third game would be crucial in deciding the final group placings with goal difference looking likely to play a part. The Derbyshire boys realised this, and this proved a real motivator in this final group game. The opening exchanges belonged to Derbyshire with several attacks created, although they could not find the crucial opening perhaps due to a lack of width in their attacks. Northamptonshire whilst absorbing this pressure, looked quite dangerous on the counter attack with Derbyshire committing numbers forward themselves, and Joe Reed in goal had to keep his concentration and make one or two important saves at 0-0.

Derbyshire then started to move the ball with more speed and purpose, and just before the break, the opening goal came as a result. It was arguably the best team goal of the day showing intelligence and patience in the buildup. Starting on the right wing with no obvious route to goal, Ryan Speed recycled the ball backwards starting a move in which about half the team touched the ball. The ball was transferred from right to left across the defence, creating an opening down the left flank, before the ball was crossed to goal for Speed to finish the job. After half time, this opened the flood gates for Derbyshire who then started to pile on the pressure, with Cameron Grady creating havoc in the opposition defence, and Derbyshire quickly added another to make it 2-0. A third goal came from a penalty corner with Jack Lloyd producing an assured finished, before Northamptonshire then pulled one back against the run of play. To complete a great performance, Derbyshire then scored another superb goal. Will Selby enjoying a spell at left back, played a sublime 30 metre overhead pass down the line to Cameron Grady who produced good work on the back line before passing the ball back neatly for Josh Taylor Grout to finish the game off. With the final score a deserved 4-1, Derbyshire had done enough to finish top of their group on goal difference, and qualify for the final.

Derbyshire undoubtedly saved the best performance for the last match. From the start, the forwards were looking sharp, and the midfield very hungry and nearly always first to the ball. Oliver Marval in particular was showing fantastic energy in the midfield, with Sam Cooke as always looking a threat in attack with his pace. With much of the game being played in the Worcestershire half, the deadlock was broken when Ryan Speed broke free just outside the circle and pulled the ball back accurately for Josh Taylor Grout to grab the opener. A second goal soon followed, again from the Derwent forward enjoying the final, by producing another clinical finish. The first half ended with Derbyshire comfortably in control and the defensive unit looking rarely troubled. There was no drop in work rate in the second half and the foot was still very firmly on the gas, although Derbyshire could not add to the scoreline. The final ten minutes saw Worcestershire get a foothold in the game and create a few attacks, but it was too little too late. Derbyshire continued to play good hockey even in the final moments of the game, when they were a player short, picking up their first green card of the day after almost two hours of hockey.

This final performance was excellent, and rounded off a long and successful day for Derbyshire. The members of this team were a good blend of different types of players, and integrated well and worked hard for each other. They were well led by coach Christian Battye, who empowered them to make their own decisions, with the positive results clear for all to see.

U16 and U17 Final AC Tournament schedules

(U16 Boys from approx 1pm to 5pm at Nottingham)

(U16 Girls running in the afternoon at Stourport)

Details of Data Controller are